Acid is produced by the stomach and plays a role in digestion of food. However, the presence of acid in the oesophagus (gullet) in excessive amounts results in inflammation (damage) to the oesophagus. This excessive reflux that causes symptoms is called GORD.

GORD is characterised by a burning sensation in the chest (just behind the breastbone). Thus this is called retro-sternal heartburn. Patients can also experience a sour taste in the back of the throat when the acid refluxes higher up. Patients may also experience pain just below the breastbone, excessive burping and belching and bad breath. They may also show evidence of poor gum and dental health. 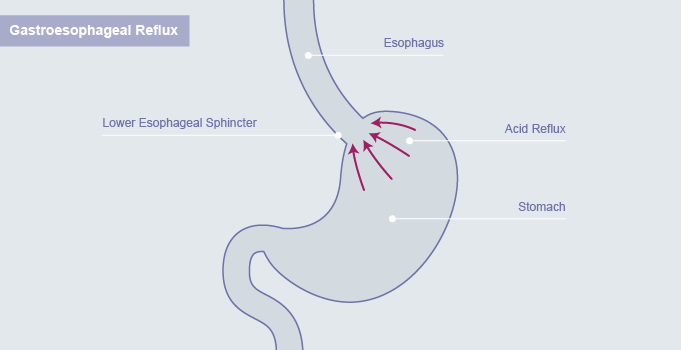 Why should GORD be treated?

Everybody experiences reflux to a small extent and this maybe triggered by excessive alcohol or certain types of foods. Reflux in considered to be serious enough to warrant medical attention if it occurs more than 3 times a week, if it affects one’s lifestyle, if it difficult to treat or if it associated with bleeding, unexplained weight loss or problems with swallowing. There is also increasing evidence that long term acid damage from GORD could lead to cancer of the oesophagus.

There has been a worrying increase in the incidence of a new type of cancer of the lower oesophagus called Adenocarcinoma. It is believed that long term damage to the lining of the oesophagus causes the lining to change to one called Barrett’s oesophagus and this is considered to be a precursor to cancer.

How is reflux diagnosed?

Reflux is usually a diagnosis based on a patient’s symptoms. Thus your doctor can start treatment for reflux without ordering any tests.

Endoscopy:
This involves passage of a narrow tube with a camera at one end, which allows the person performing the test to look inside the oesophagus and stomach. It is nearly always performed in a hospital with either throat spray to numb the back of the throat or with sedation.

Other investigations:
• Barium swallow
• Acid studies to measure the extent of the reflux.

How is GORD treated?

There are some simple measures that can reduce the reflux of acid and thus the damage from the acid:
• Losing weight
• Eating small frequent meals and avoiding large meals
• Avoiding those foods and drinks that trigger reflux such as spicy foods, chocolates, coffee and alcohol.
• Stopping smoking
• Sleeping propped up on 2-3 pillows or raising the head end of the bed
• Not lying down immediately after meals but waiting for at least 2 hours

Antacid tablets and syrups only control the heartburn by neutralising the acid. Other medications that reduce acid production are called H-2 receptor blockers and Proton Pump inhibitors (PPIs). The former are available over the counter but the latter has to be prescribed by your doctor.

Research shows that while medications may control symptoms, they are not effective at preventing the acid induced damage to the oesophagus as acid reflux still continues but without the symptoms associated with it.
There is also research that suggests that surgery is more effective in the long term.

Surgery to treat GORD is almost always undertaken laparoscopically (key-hole), except in cases where there has been previous surgery on the abdomen. However, even in those instances, an attempt is made to perform laparoscopic surgery and if this is technical difficult, then the surgery is converted to open.

The aims of surgery are:
• Restore the stomach back into the abdomen
• Restore a sufficient length of the oesophagus in the abdomen
• Narrow the opening in the diaphragm (a muscular curtain between the chest and the abdomen)
• Create a new valve at the lower end of the gullet by using a mobile part of the stomach called the fundus. That is the reason that the operation is called a fundoplication.

What are the results of surgery?

Success after surgery occurs in 90% of cases. Of the other 10%, some patients may experience moderate relief. Despite detailed investigations it is difficult to predict who is likely to get the maximum benefit from surgery.

What are the consequences of surgery?

Difficulty in swallowing:
The surgery will result in some swelling around the new valve which makes swallowing difficult for the first 6-8 weeks after surgery. Thus, patients are required to eat soft food for this period. Anything that is ‘fork-mashable’ should be well tolerated. You should refrain from eating large pieces of potato, dry bread and red meats.

Difficulty in burping:
The new valve may also make burping a bit difficult for the first few days. Thus, you should refrain from drinking fizzy drinks for the first 6-8 weeks till the swelling from the operation settles down.

What are the possible complications of surgery?

Life threatening complications such as damage to the stomach, oesophagus or spleen are extremely rare.

Difficulty in swallowing (dysphagia) may persist beyond 3 months after the surgery. Usually in these cases stretching the new valve with an endoscope may produce good results. Similarly difficulty in burping may result in trapped gas in the stomach (‘gas bloat’).

Recurrence of reflux symptoms is also rare and occurs only in around 10% of cases. This can be managed with medications or may need repeat surgery in a very small number of cases (2-4%).

If you suffer from symptoms such as bloating, these may get exacerbated by the surgery.

Infection and bleeding of the small laparoscopic incisions are also quite rare.

A swelling at the site of one of the key hole incisions maybe a result of bleeding, infection or a hernia, called a port site hernia.

Chest complications such as collapse of the base of the lung and pneumonia are also rare and occur more often after open surgery and not laparoscopic surgery.

Clots in the legs (thrombosis) which could travel into the lungs also rare if all the necessary precautions are taken.

How long does it take to recover?

You should be able to carry out most of your normal activities including light exercises around 2 days after surgery. However, this varies from patient to patient and depends on the extent of discomfort.