Gallstones are usually small stones made of cholesterol that form in the gall bladder. They can occur at any age but are more common in women between the ages of 35 and 65.

Cholesterol stones are the most common type. Risk factors for developing these are female sex, age above 30 and obesity. Other risk factors are rapid weight loss and diet that is rick in fats and cholesterol and low in fibre.
Pigment stones. Rare. Usually occur in patients with conditions that lead to increased destruction of red blood cells or in those with blockage to the main bile tubes (ducts). 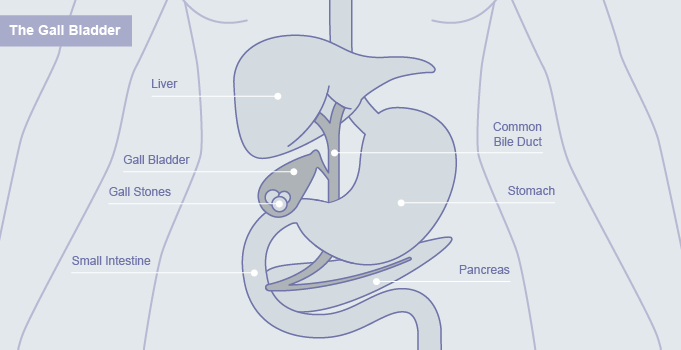 What problems do Gallstones cause?

If gallstones do not cause any symptoms they are referred to as asymptomatic gallstones. It is likely that there are a large number of people who have gallstones in the their gall bladders without suffering any of the symptoms associated with them.

Symptomatic gallstones usually lead to pain and discomfort either in the upper abdomen or just below the rib cage on the right side. The pain is usually brought on by foods, especially those rich in fats. This pain is called biliary colic. The pain lasts from 30 mins to sometimes even a few hours. The pain can be accompanied by nausea.

In addition to causing pain, gallstones can cause severe inflammation of the gall bladder leading to cholecystitis. Cholecystitis is characterised by an intense pain on the right side, just below the rib cage, and may be accompanied by nausea and vomting.

Gallstones can slip out of the gall bladder and cause blockage of the bile duct which leads to jaundice. Jaundice is the yellow discolouration of the tissues of the body, most commonly seen as yellowing of the whites of the eyes. A blocked bile duct is a risk factor for developing infection and the condition is then referred to as ascending cholangitis. This can be a life threatening condition and that is the reason that patients who are known to have gallstones and develop jaundice should seek medical attention urgently. Patients with ascending cholangitis experience a triad of pain, fever and jaundice.

How are Gallstones diagnosed?

An ultrasound scan is the most reliable and accurate diagnostic test for gallstones. An MRI is highly sensitive test to diagnose a stone in the bile duct.

How are Gallstones treated?

Asymptomatic gallstones that are detected incidentally during scans for other conditions do not need to be treated.

Symptomatic gallstones are usually treated by surgical removal of the gall bladder. This is because a gall bladder that develops gallstones is not functioning as it should be and is chronically inflamed when examined under the microscope.

There are other treatments such a medical treatment with a drug called ursodeoxycholic acid and shock wave destruction of small gallstones called lithotripsy. However, both these types of treatments are associated with a very high risk of redeveloping gallstones.

What are the consequences of losing the gall bladder?

How are other gallstone related conditions treated?

Bile duct stones: Stones in the bile duct can be removed by endoscopy wherein an endoscope in introduced through the mouth and the stones are removed by introducing special instruments through the opening of the bile duct into the first part of the small bowel, called the duodenum (fig). This has to be followed by gall bladder surgery is nearly all cases.

An infected blocked bile duct (ascending cholangitis) and acute gallstone pancreatitis are both life threatening emergencies which should be managed by admission to a hospital under the care of a surgeon.

Surgery for removal of the gall bladder (cholecystectomy)

This nearly always done through key-hole (laparoscopic) surgery. More recently it can also be done through single incision (scarless) surgery.

Occasionally it may be necessary to perform gall bladder surgery by the traditional (open) technique. This is especially in cases where there has been previous surgery on the abdomen. However, even in those instances, an attempt is made to perform laparoscopic surgery and if this is technical difficult, then the surgery is converted to open.

Major complications after laparoscopic cholcystectomy are extremely rare. Life threatening complications such as injury to the bile duct, bowel or major blood vessels occur in less than 3 in 1000 cases. The more common complications of infection and bleeding of the incisions are also quite rare. A swelling at the site of one of the key hole incisions maybe a result of bleeding, infection or a hernia, called a port site hernia.

Chest complications such as collapse of the base of the lung and pneumonia are also rare and occur more often after open surgery than laparoscopic surgery.

Clots in the legs (thrombosis) which could travel into the lungs also rare if all the necessary precautions are taken.